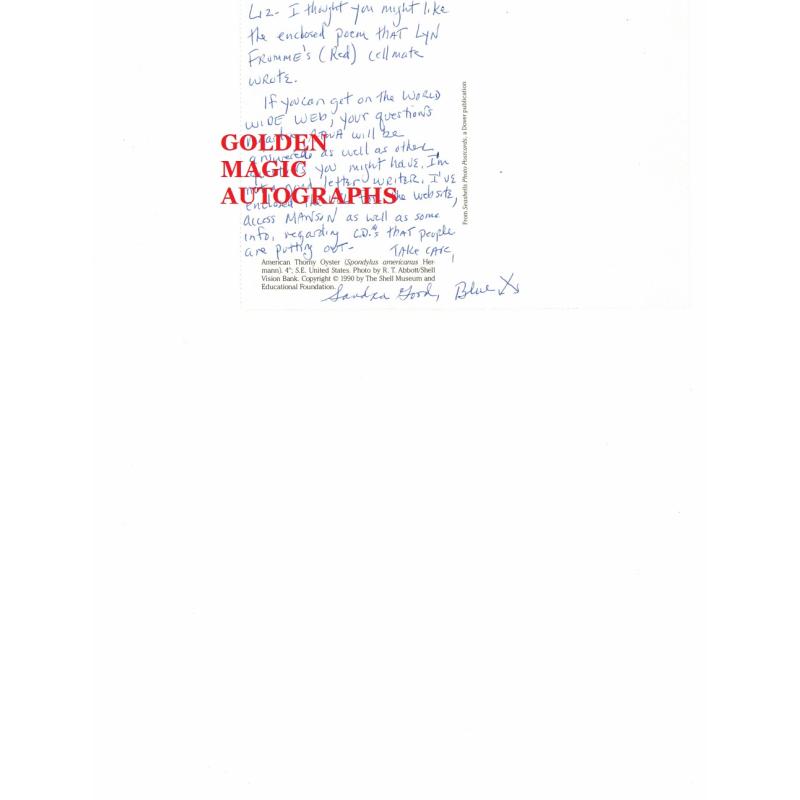 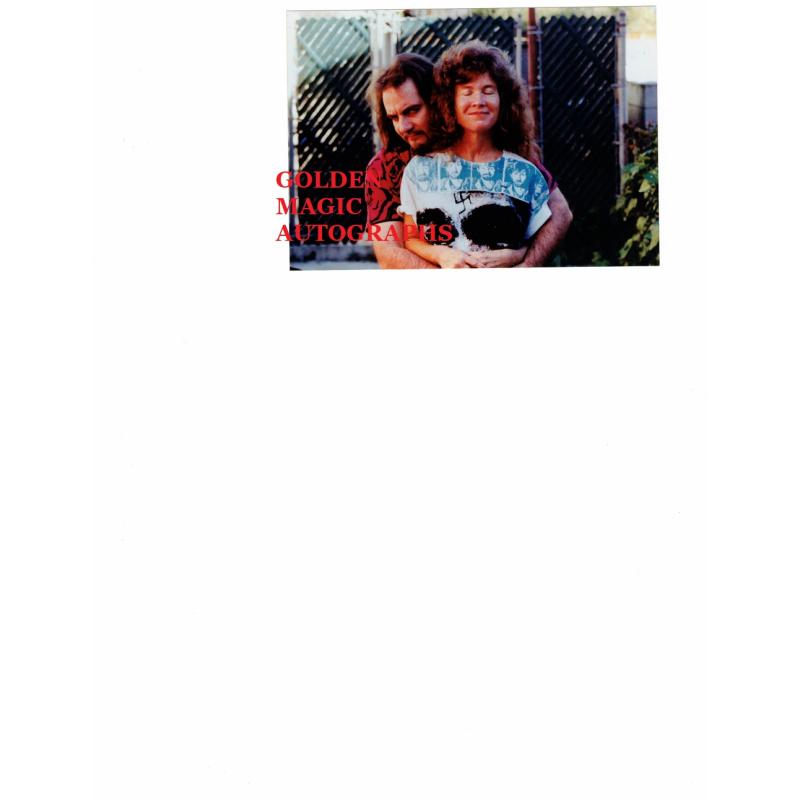 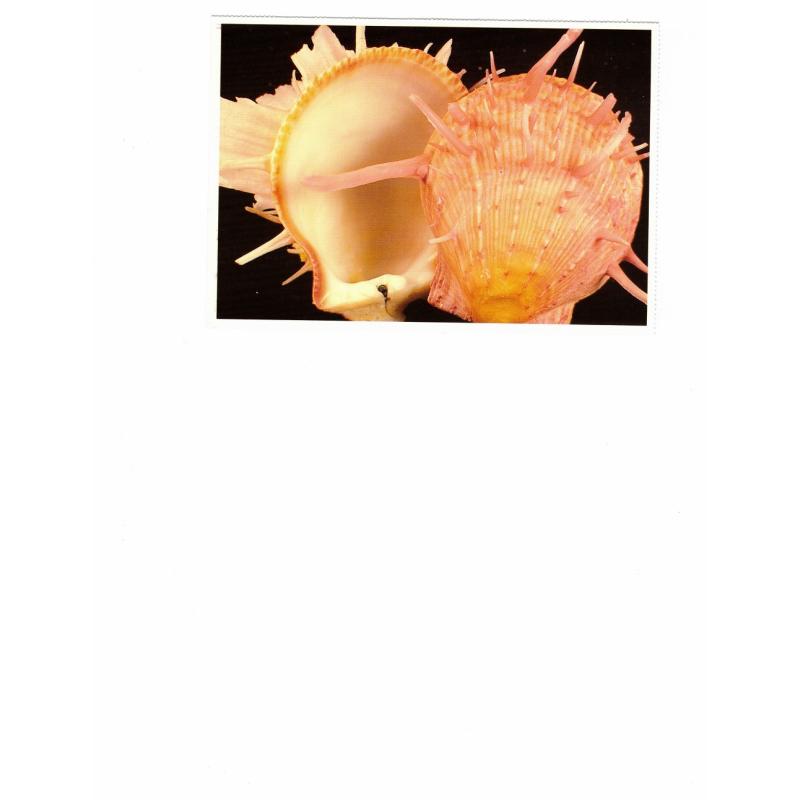 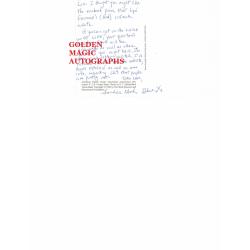 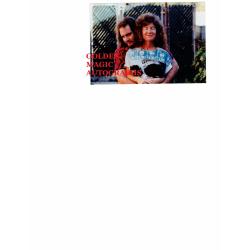 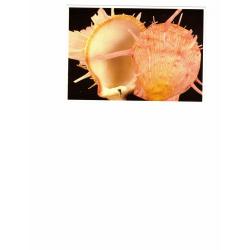 This is a Greeting Card signed "SANDRA GOOD, BLUE" by SANDRA GOOD.   She references Squeaky Fromme, and the ATWA.  Also comes with a picture of Good with Nick Bougas.

Comes from a smoke free environment. I AM CURRENTLY ACCEPTING CREDIT CARD PAYMENTS THROUGH STRIPE. YOU DO NOT HAVE TO BE SIGNED UP TO STRIPE. I WILL SIMPLY BILL YOU THROUGH THEM IF YOU WANT TO USE A CREDIT CARD.  YOU CAN ALSO USE APPLE PAY, OR US POSTAL MONEY ORDERS. I WILL CONTACT YOU AFTER YOUR WIN/PURCHASE WITH PAYMENT INSTRUCTIONS.

Sandra Collins Good (born February 20, 1944[1]) is a long-time member of the Manson Family and a close friend of Lynette "Squeaky" Fromme. Good's Manson Family nickname is "Blue", which was given to her by Charles Manson to represent clean air and water.

On December 22, 1975, Good and another Manson devotee, Susan Murphy, were indicted for "conspiracy to send threatening letters through the mail" by a Federal Grand Jury in Sacramento in connection with death threats against more than 170 corporate executives who Good believed (see ATWA) were polluting the earth.[8] Found guilty on March 16, 1976,[9] Good was sentenced on April 13 to a 15 year prison term.[

Good was paroled in early December 1985, and released from the Federal Correctional Center for Women in Alderson, West Virginia, after having served nearly 10 years of her 15 year sentence; unlike many Manson Family members, at that time Good still professed total allegiance to Manson.[11] A condition of her parole was that she could not reside in California. She lived instead in Vermont,[12] where she lived quietly under the name Sandra Collins (or at times, "Blue Collins") until 1989, when her environmental activism made the news and her identity was made public.[13]

Following her parole, Good moved to Hanford, California, near Corcoran State Prison, to be closer to Manson, although as a convicted felon she was not permitted to visit him. On January 26, 1996, she and George Stimson began a now-defunct, pro-Manson website named Access Manson,[14] about which prosecutor Stephen Kay said, "[it] gives her [Good] an outlet where she can do things for [Manson]."[15] Good also used the website to support Manson's environmental movement, ATWA (Air Trees Water Animals).

In a 2019 interview, Good said, "They [Manson and his "family"] really saved my health, my brain, my emotional health, my mental health, my physical health. I’m thankful to them all,” and credited Manson with teaching her about the “deep connection to the natural world.

SHIPS IN PROTECTIVE SLEEVE WITH ACID FREE BACKING BOARD. 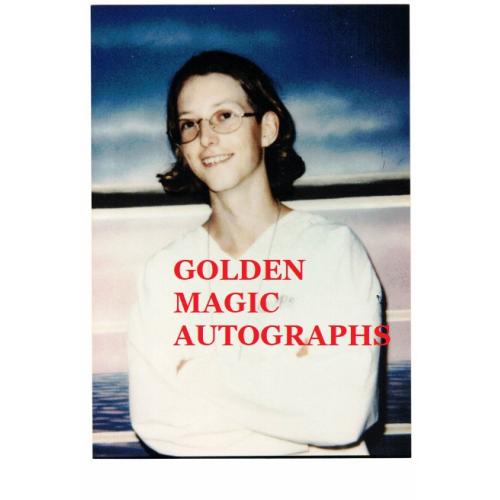 This is a PHOTO signed by JASON BALDWIN.  Signed on back IN FULL.  "JB JASON BALDWIN".Comes from a smoke free environment. I AM CURRENTLY ACCEPTING CREDIT CARD PAYME... 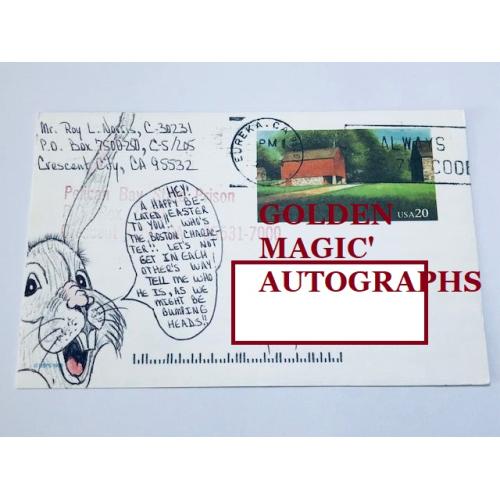 This is a postcard with an Easter Bunny drawing on the front wishing the recipient a Happy Belated Easter.  Signed "Roy L. Norris" across the message part of the postcar... 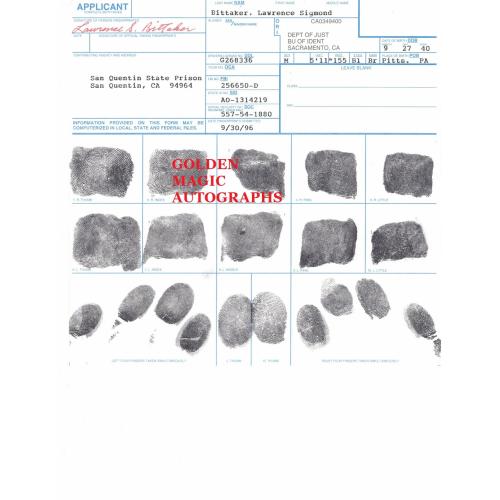 This is a LAWRENCE BITTAKER signed FINGERPRINT CHART.  Size is 8x8".  Signed in Red Ink.Comes from a smoke free environment. I AM CURRENTLY ACCEPTING CREDIT CARD PAY... 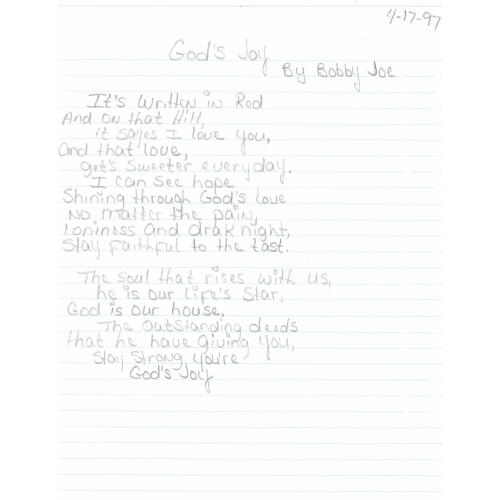