This is card No. 84, PETER SUTCLIFFE , from the True Crime Series Two: Serial Killers & Mass Murderers.

SHIPPING INFO:  Card will be mailed in a hard plastic top load holder.  USPS First Class Mail is $1.50.  You may select addition options, such as tracking or Priority Mail if you like.

Peter William Coonan (born Peter William Sutcliffe; 2 June 1946) is an English serial killer who was dubbed the "Yorkshire Ripper" by the press. In 1981, Sutcliffe was convicted of murdering 13 women and attempting to murder seven others.

Sutcliffe initially attacked women and girls in residential areas but seems to have moved to red light districts, because he was attracted by the vulnerability of prostitutes.[1][2] Sutcliffe had allegedly regularly used the services of prostitutes in Leeds and Bradford. When interviewed by authorities, he claimed that the voice of God had sent him on a mission to kill prostitutes. Sutcliffe carried out murders over five years, during which time some members of the public were especially shocked by the murders of women who were not prostitutes.[3] After his arrest for driving with false number plates in January 1981, the police questioned him about the killings, and he confessed to being the perpetrator.

At his trial in 1981, Sutcliffe pleaded not guilty to murder on grounds of diminished responsibility after a diagnosis of paranoid schizophrenia, but his defence was rejected by a majority of the jury. He is serving 20 concurrent sentences of life imprisonment. Following his conviction, Sutcliffe began using his mother's maiden name and became known as Peter William Coonan.

West Yorkshire Police were criticised for the time taken in apprehending Sutcliffe, despite having interviewed him nine times in the course of their investigation. Because of the sensational nature of the case, the police handled an exceptional amount of information, some of it misleading (including a hoax recorded message and letters purporting to be from the "Ripper"). The 1982 Byford Report of the official inquiry (made public in 2006) confirmed the validity of the criticism.

The High Court dismissed an appeal by Sutcliffe in 2010, confirming that he would serve a whole life order and never be released from custody.[4] He was transferred from prison to a high-security psychiatric hospital in March 1984. In August 2016, it was ruled that Sutcliffe was mentally fit to be returned to prison, and he was transferred that month to HM Prison Frankland in Durham. 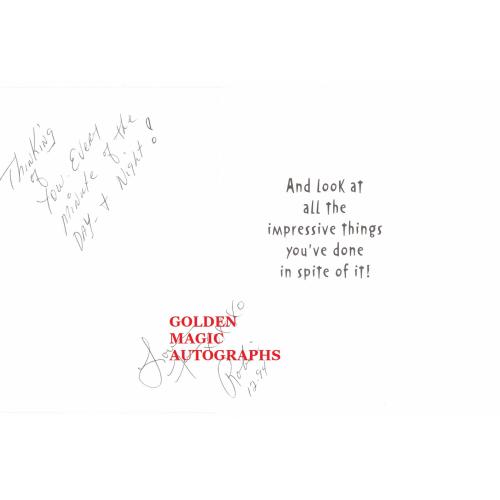 This is a greeting card signed by ROBIN GECHT.  The notation in the card reads, "Thinking of You Every Minute of the Day & Night!".  He signs the card "L...

This is a drawing signed by Carol Bundy.  She has written the title "Quicksand" on the back.  Drawn on what appears to be inking cardboard, the size is 8 1/2 ...