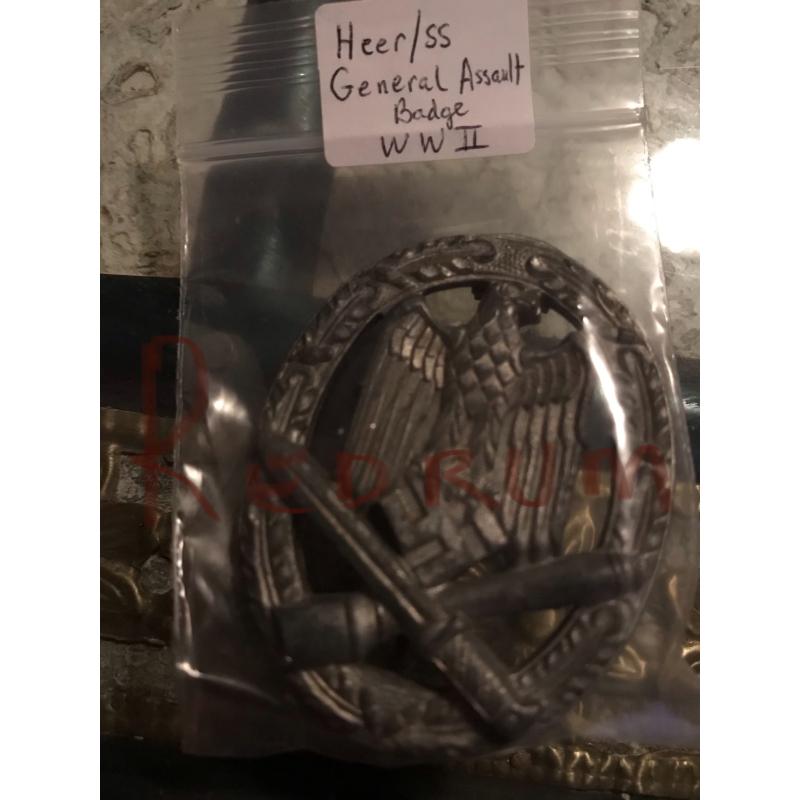 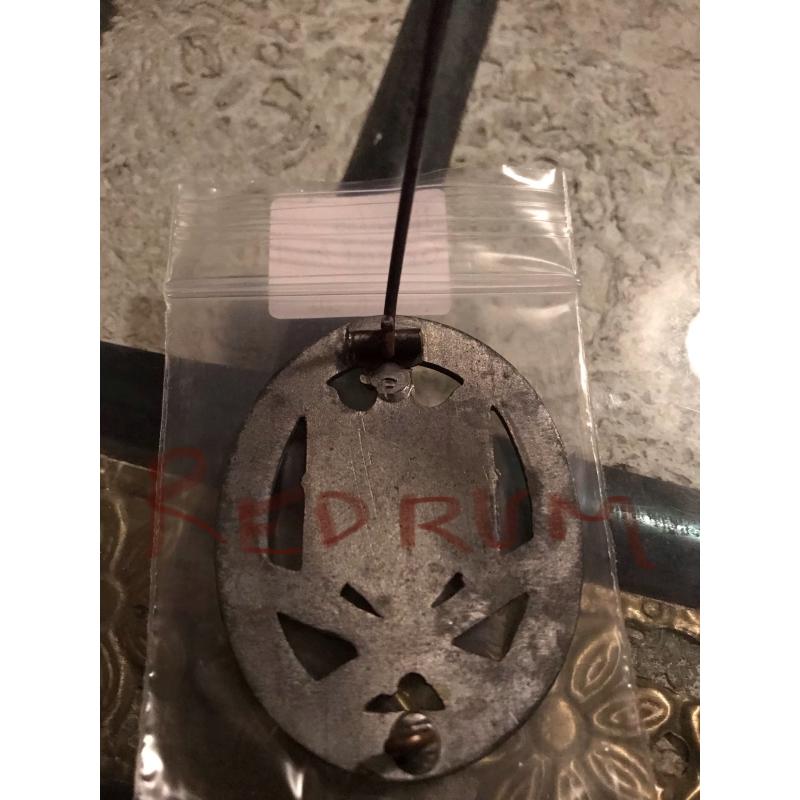 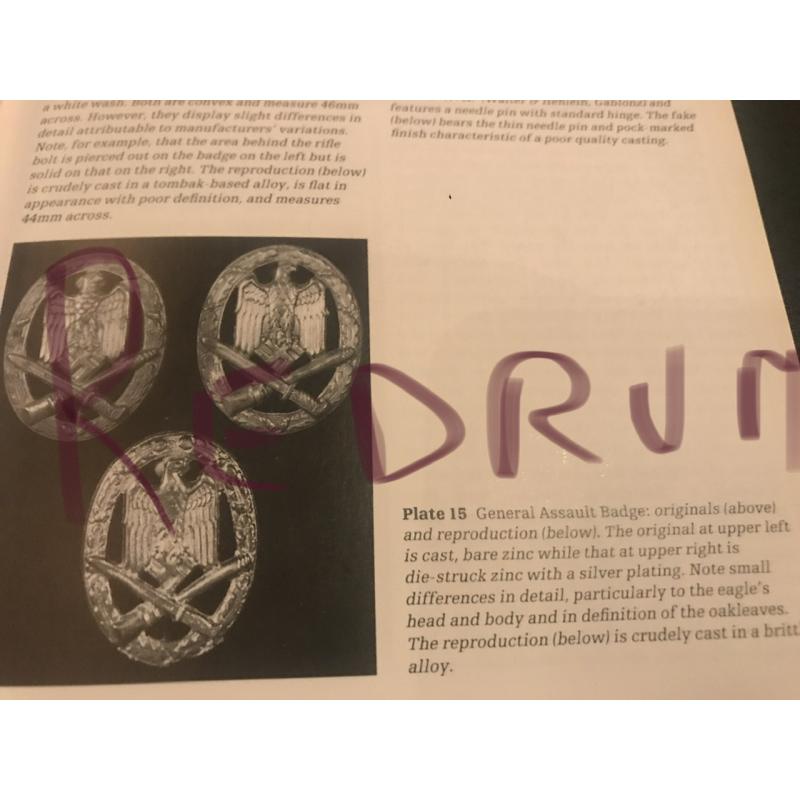 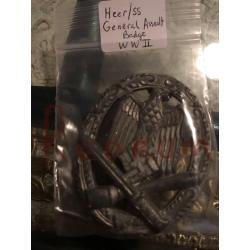 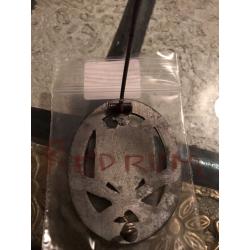 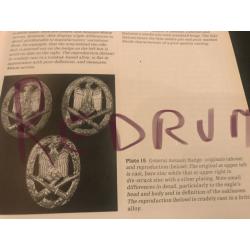 This is absolutly a wonderful and original and authentic and not a replica. The composition is zinc with silver.

Product Description: This is a desirable General Assault Badge with loads of original, frosted silver finish. The manufacturer of this pattern of General Assault Badge is unknown. The material is zinc, and this is a heavy, solid-back type. The front of this badge retains 95 percent of the original silver finish, which has an attractive, matte “frosted” look. The high points to the design show some wear, exposing the dull gray color of the base metal. The eagle design on this badge is particularly striking. The rear of the badge also retains nearly all of the finish, with some normal and typical age patina build-up. The hardware is intact, functional, and shows no sign of repair. The round steel wire pin has some surface corrosion in a few spots, nothing major. This General Assault Badge is a great, uncleaned example of this variant, with far more finish than is usually encountered on a zinc badge. It’s a really nice one.

Historical Description: The German General Assault Badge was instituted on June 1, 1940. When the first Heer (Army) combat badges were instituted they only recognized those in the Infantry and Panzer (Tank) units. This left the supporting elements of the German Army without an award to recognize their combat achievements. Initially the General Assault Badge was intended for Combat Engineer units, but later this was expanded to include other units such as Panzerjäger’s (Tank Hunters), Cavalry Units, down to Medical Personnel who assisted the Infantry or Panzers during combat engagements. Eligibility also continued to grow to include members of the Luftwaffe (Air Force), Kreigsmarine (Navy), Waffen-SS, and Combat Police units.

The Standard General Assault Badge consists of an Oakleaves wreath surrounding a large National Eagle grasping the swastika with crossed bayonet and stick grenade underneath. The General Assault Badge can be found in several different base metals such as Brass, Copper Coated Aluminum, Copper Coated Zinc, and Zinc. The use of the different types of base metal was directly impacted by the war as it progressed. Shortages forced manufacturers to switch from quality base metals like brass to lower quality base metals like zinc. 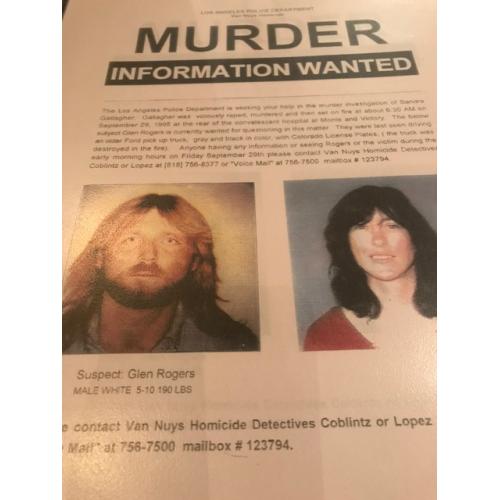 Glen Rogers Los Angeles Police Department poster from 1995You will get a 8.5 x 11 color copy of the original.This is a reprint 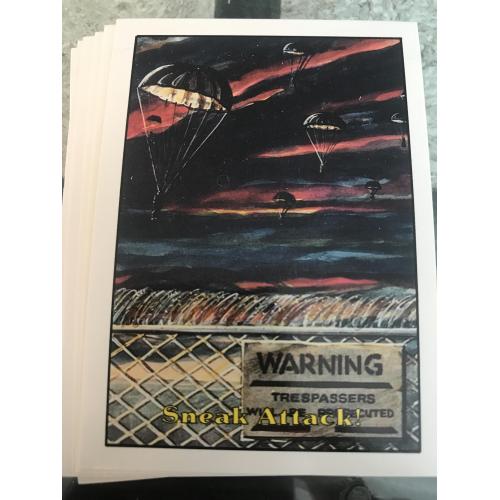 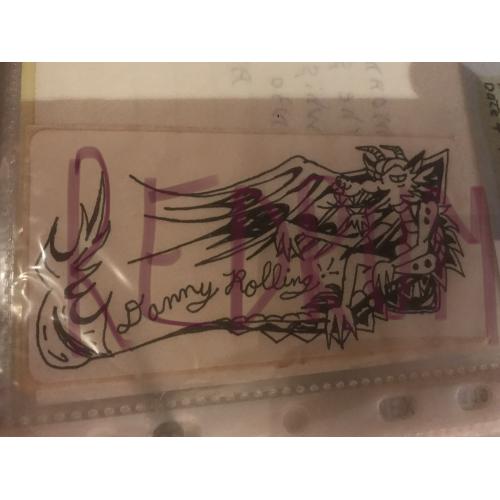 Deceased - Danny Rolling dragon in ink signed on a sticker from early 1990’sHe did 8 different drawings totaling 15 stickers something he never did again.Some where dra...