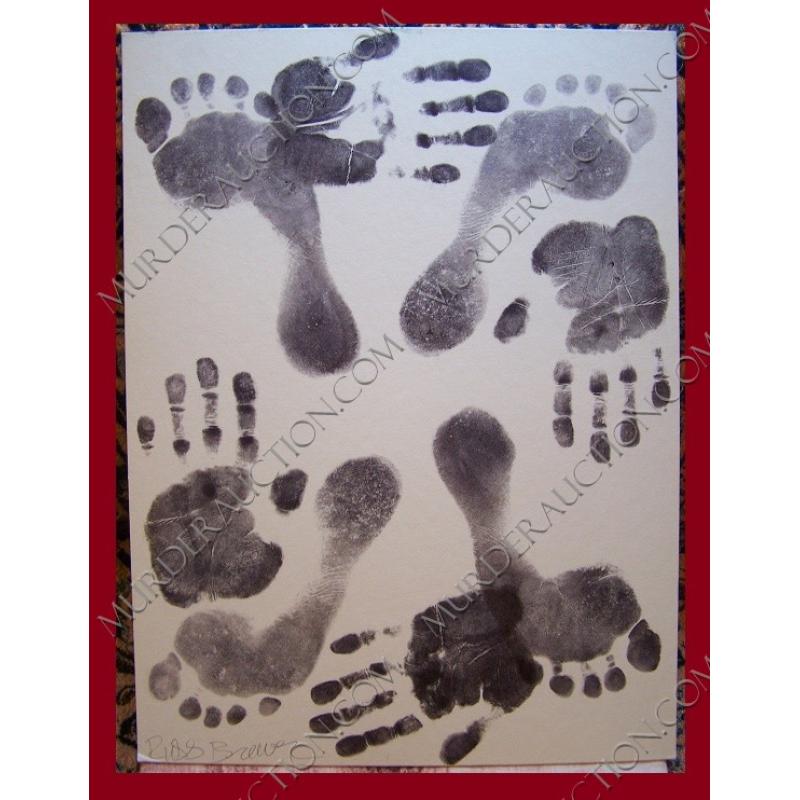 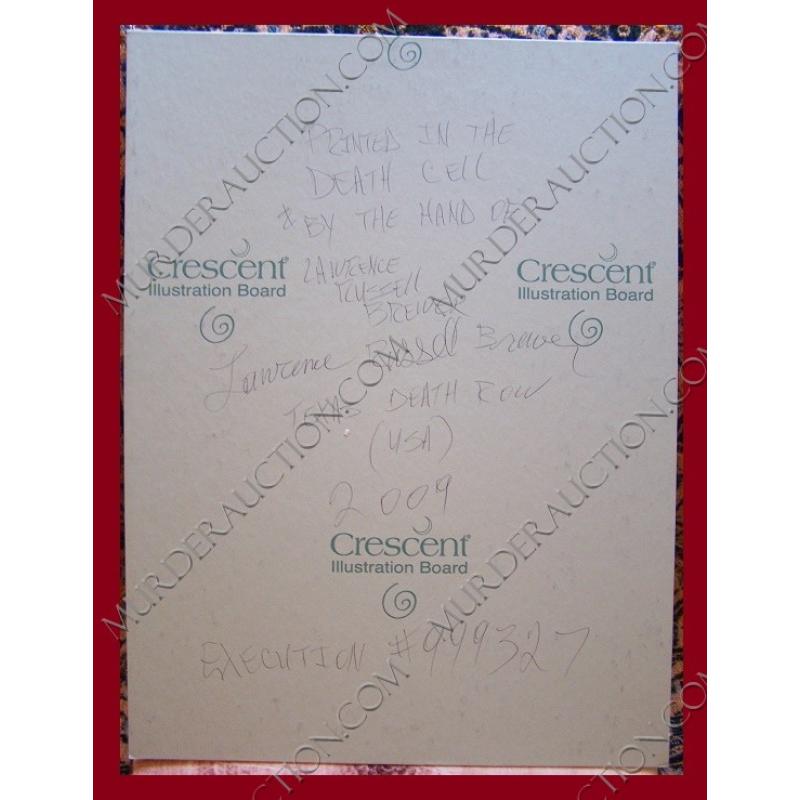 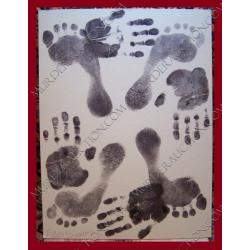 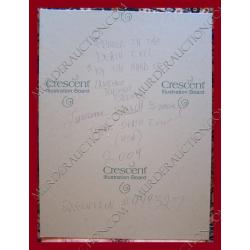 Hand/foot prints, forming a swastika, arranged by the participant in the Jasper, TX dragging death of an African American man.

This auction is hand/foot print art by executed Texas convicted murderer Lawrence Russell Brewer (3/13/1967 – 9/21/ 2011). During the early morning hours of 6/7/1998, in rural Jasper County, Russell Brewer, with accomplices Shawn Allen Berry and John William King, invited a local African American man they knew to accompany them, after seeing him walking home. After what was initially thought to be "a drug deal gone bad," the three men beat, stabbed, and dragged his body about three miles. Forensic evidence very clearly suggested the victim was dead prior to being dragged. The victim was later said to be alive while he was dragged to add kidnapping to the charges in order to secure a death sentence. John King was convicted for his role in the crime and sentenced to death on 2/25/1999. Russell Brewer and Shawn Berry were each tried separately. Russell Brewer was convicted and sentenced to death on 9/23/1999. Shawn Berry rejected a plea deal (offered by the U.S. goverment), was convicted at trial, and subsequently sentenced to life on 11/19/1999. Due to gross misconduct by prosecutors and numerous legal issues, John King's execution was delayed. But the State of Texas kills, regardless of innocence or guilt. John King was executed 4/24/2019. Brewer was executed 9/21/2011. He was 49.

There are two interesting facts about the executions of both Lawrence Russell Brewer and John William King. Brewer was said to have declined his final meal, thus creating a change within the Texas Department of Criminal Justice, dispensing with the customary "last meal" request. Inmates to be executed would be given what the prison was serving that evening, no special requests to be accepted. The truth is Brewer left his bible in the prison transportation van, which had all of his phone numbers. Texas death row inmates are not allowed to use the phone, except in the hours leading up to their executions. So, you can image having those numbers are very important. Officers gave Brewer a choice, they would either get his final meal or his bible. Of course this isn't how the incident was presented to the media. Another change in policy came with the execution of King, who gave a final written statement, "Capital punishment: Them without the capital get the punishment." Written statements are important as the State of Texas routinely misprints final words on their website. Without a final written statement they can basically print whatever they want. This only hurts surviving family members. After King's powerful last words, the T.D.C.J. barred inmates from giving a final written statements.

ITEM DESCRIPTION: The hand and foot prints are in ink, measures 15"×20", and is signed in the bottom left corner, "Russ Brewer." The prints form a swastika. On the reverse Brewer has written, "Painted in the death cell & by the hand of Lawarence Russell Brewwer, Lawrence Russell Brewer, Texas Death Row, USA, 2009, execution # 999327." There is a little ding in the bottom left corner, visible in the photo. A professional matt and frame job would fix that right up! Brewer did not routinely do artwork. As far as I know this is a one-of-a-kind. Here's your chance to own a unique piece of true crime history! Message me with any questions you might have. Thanks for having a look-see. 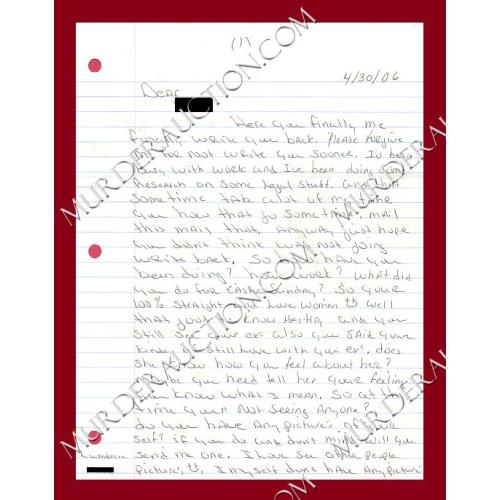 Letter/envelope set from the seven time filicide and child killer. 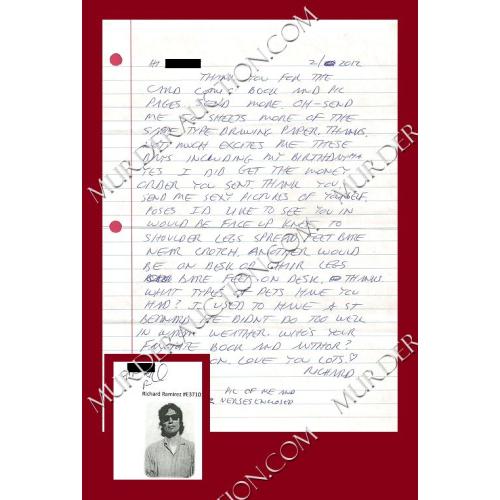 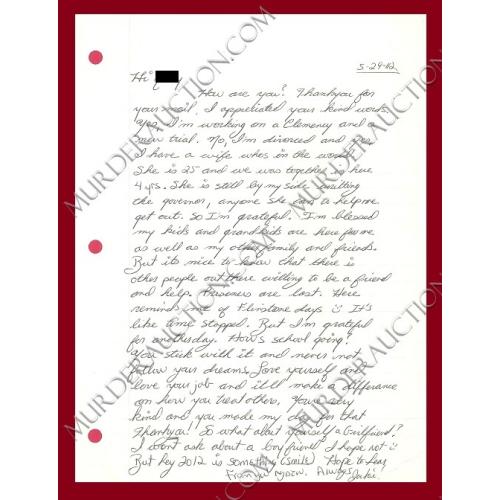 Letter/envelope set from the Illinois triple murderer who cut out a full-term fetus. 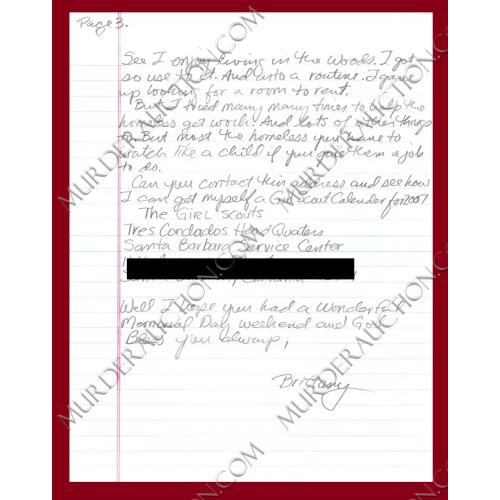