Artwork, signed with bloody thumbprint, by the Maryland suspected serial killer and cannibal.

This auction is for a drawing by recently deceased Maryland convicted murderer, confessed cannibal, and suspected serial killer Mr. Joseph Roy Metheny (03/02/1955 ─ 8/5/2017), nicknamed "Tiny" due to his morbid obesity. In 1998 Mr. Metheny was originally condemned for the 1994 and 1996 homicides of two women. An appeals court would later overturn his death sentence, re-sentencing him to life without parole. Metheny was arrested in connection with the double axe murders of two homeless men, but he was never convicted. Metheny claimed he butchered the bodies of the two women from his murder convictions and sold the meat in a roadside stand, citing, "I opened up a little open-pit beef stand. I had real roast beef and pork sandwiches. They were very good. The human body taste was very similar to pork. If you mix it together no one can tell the difference." Metheny would confess to roughly 10 additional murders, including the two homeless men, during his incarceration, although no new charges were ever filed. Metheny was found dead in his cell 8/5/2017. It's my guess he likely expired from a heart attack, people are full of cholesterol, you know? He was 62-years-old.

ITEM DESCRIPTION: The artwork is on paper, 8.5"×11", done in color pencil, and signed, "Tiny Arts," with a bloody thumbprint. Unlike most of Metheny's artwork, which most often captures elements of rape, murder, violence, and satanic imagery, this piece is of a flying dragon. It is eating someone, so I guess there is still that level of violence. Maybe he was just getting a ride? The artwork comes inside a protective magazine sleeve with an acid free board and has been stored flat. Message me with any questions you might have. Thanks for having a look-see. 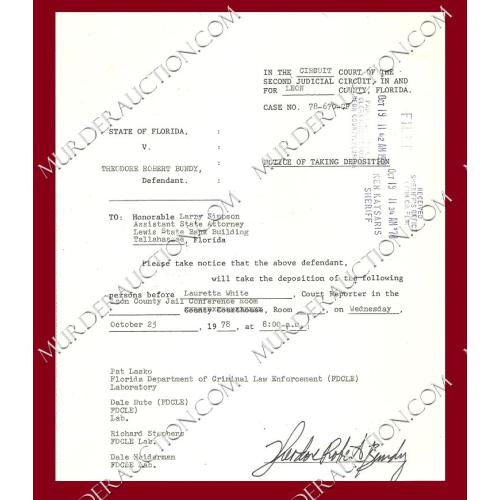 One page letter from the suspected "Atlanta Child Murderer."