Two page document signed by Hermann Goring.  Both pages are signed!  Part of the "H" in "Hermann" is a bit defective where it appears Goring bore down a bit too hard when he started signing the document.

The first page looks like a request for repair on an aircraft "holder" or hanger.  The second page is a letter from Goring saying nothing had been done so far and he wants this taken care of soon and to his satisfaction.  This is the page that has the semi-defective "H" in the signature.

listen); 12 January 1893 – 15 October 1946) was a German political and military leader as well as one of the most powerful figures in the Nazi Party (NSDAP), which ruled Germany from 1933 to 1945. A veteran World War I fighter pilot ace, he was a recipient of the Pour le Mérite ("The Blue Max"). He was the last commander of Jagdgeschwader 1 (Jasta 1), the fighter wing once led by Manfred von Richthofen.

An early member of the Nazi Party, Göring was among those wounded in Adolf Hitler's failed Beer Hall Putsch in 1923. While receiving treatment for his injuries, he developed an addiction to morphine which persisted until the last year of his life. After Hitler became Chancellor of Germany in 1933, Göring was named as Minister Without Portfolio in the new government. One of his first acts as a cabinet minister was to oversee the creation of the Gestapo, which he ceded to Heinrich Himmler in 1934. Following the establishment of the Nazi state, Göring amassed power and political capital to become the second most powerful man in Germany. He was appointed commander-in-chief of the Luftwaffe (air force), a position he held until the final days of the regime. Upon being named Plenipotentiary of the Four Year Plan in 1936, Göring was entrusted with the task of mobilizing all sectors of the economy for war, an assignment which brought numerous government agencies under his control and helped him become one of the wealthiest men in the country. In September 1939 Hitler designated him as his successor and deputy in all his offices. After the Fall of France in 1940, he was bestowed the specially created rank of Reichsmarschall, which gave him seniority over all officers in Germany's armed forces.

By 1941, Göring was at the peak of his power and influence. As the Second World War progressed, Göring's standing with Hitler and with the German public declined after the Luftwaffe proved incapable of preventing the Allied bombing of Germany's cities and resupplying surrounded Axis forces in Stalingrad. Around that time, Göring increasingly withdrew from military and political affairs to devote his attention to collecting property and artwork, much of which was stolen from Jewish victims of the Holocaust. Informed on 22 April 1945 that Hitler intended to commit suicide, Göring sent a telegram to Hitler requesting permission to assume control of the Reich. Considering his request an act of treason, Hitler removed Göring from all his positions, expelled him from the party, and ordered his arrest.

After the war, Göring was convicted of conspiracy, crimes against peace, war crimes and crimes against humanity at the Nuremberg trials in 1946. He was sentenced to death by hanging, but committed suicide by ingesting cyanide hours before the sentence was to be carried out.

I SHIP TO THE US, CANADA, AND THE UK.

INSURANCE INCLUDED IN US SHIPMENTS. 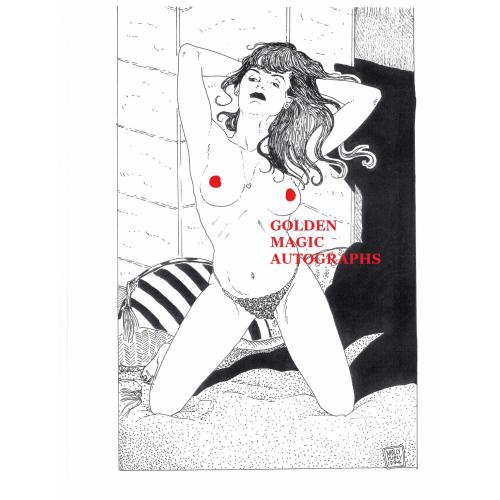 This is card No. 73,  DAVID BERKOWITZ, from the True Crime Series Two: Serial Killers & Mass Murderers.  SHIPPING INFO:  Card will be mailed in a hard plastic top load... This is an 2 page letter, signed "Bob" by ROBERT HANSEN.  Comes with original mailing envelope which is SIGNED IN FULL!!  Also included is a Dennis the Menace...

This is a drawing signed by Carol Bundy.  She has written the title "Quicksand" on the back.  Drawn on what appears to be inking cardboard, the size is 8 1/2 ...