It's that time of year again, time for the Murder Auction Halloween - Black Friday 2020 Murderous Murderabilia Special! Select auctions will be listed with a start bid of $1.00/NO RESERVE. They will all be scheduled to close on Black Friday. Here's your chance to take home unique true crime collectibles and still have money left over for Christmess! Good luck and happy bidding! Collect the unexpected and HAPPY HALLOWEEN!

ITEM DESCRIPTION: The missive is two pages on one legal size sheet of stationery, dated 4/17/2004, and signed, "Wayne." The original mailing envelope is postmarked 4/19/2004. The letter and envelope come inside a protective magazine sleeve with an acid free board and have been stored flat. Message me with any questions you might have. Thanks for having a look-see.

Hand tracing with fingerprints by the deceased California serial killer. 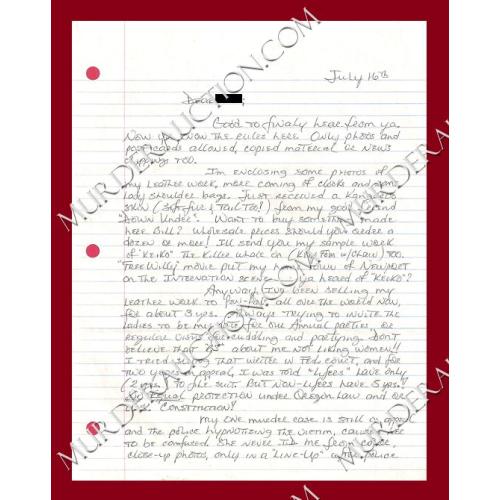 Letter/envelope set from the Oregon "I-5 Killer".